Happy (Canadian) Thanksgiving everyone! I love this time of the year. So much to be thankful for. Family, friends, health, prosperity…life has been good. Oh and it helps that in my part of the world we are immersed in a weather utopia with mild temperatures, blazing sunshine and a riot of fall colours already beginning to blossom. 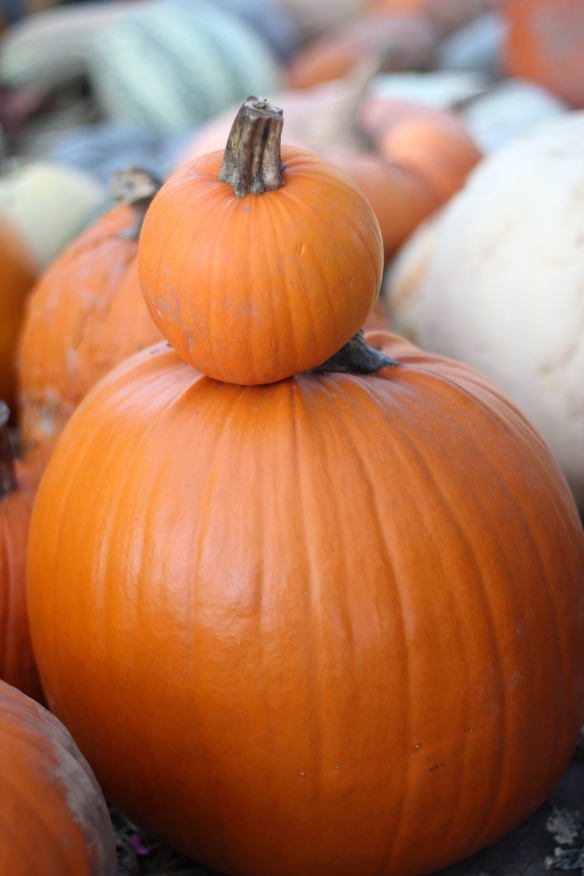 Be forewarned: this is a long post but you will be rewarded with three original recipes + links to more recipes I have tried.

Amongst the things I am thankful for is being able to enjoy a vegan, plant-powered Thanksgiving feast that made taste buds sing. The only true veg guests at our table of nine (+ my eleven day old niece) were my sister and I, though everyone else is food adventurous and certainly open to trying anything. My sister’s only directive was “just make something that will serve as a vehicle for cranberry chutney”. Ok, mission accepted.

Now you will have to pardon the quality of the photos in this post as I was snapping pics in what can only be described as delighted chaos. I was cooking in my mom’s kitchen, sharing precious counter space with her as she made her menu items, making up recipes and writing them down as I went along and ensuring that the finished products were in sufficient quantities and edible and more or less ready at the same time. And all along trying to ensure my camera survived intact.

Flowers from my parent’s garden adorning our festive table

While my mom made the customary turkey for the non-veg folks at the table along with her infamous wild rice and sausage stuffing, she did contribute to the veg menu by making a savoury mushroom gravy and a separate dish of her stuffing with roasted chestnuts in lieu of the meat. They were amazing! I will have to work out the recipes and share with you soon. (Question: is it still called stuffing when you’re not stuffing anything with it? Things that make you go hmm).

The other side dishes she made were naturally veg-friendly and the only adjustment needing to be made to some recipes was to replace butter with olive oil or Earth Balance.
I supplemented the dinner menu with three items of my own plus two pies for dessert (a pumpkin pie and apple pie – in my opinion you cannot have one without the other).

And now for the recipes!

Roasted Butternut Squash, Cauliflower and Sage Soup
This soup was inspired by the flavours of a Butternut Squash Ravioli with Sage Browned Butter I have made in the past for Thanksgiving. This year I did not have enough time to make this relatively easy, albeit time intensive recipe but still craved the silky, buttery, luscious flavours. So I came up with this soup, and I have to say the results were definitely reminiscent of the melt-in-your-mouth raviolis. In part I think this had to do with the fact that I pureed the soup in a Vitamix blender as opposed to using an immersion blender – this decision transformed the soup from good to great, simple to celebratory, smooth to silken.

1. Preheat oven to 400⁰F, line large baking sheet with parchment paper.
2. Toss butternut squash and cauliflower with olive or coconut oil, half of the sage leaves, turmeric, cinnamon, cloves, allspice, salt and several grindings of black pepper. Tip out onto parchment-lined baking sheet and bake for about 30-45 minutes, until cooked through and golden (time will depend on your oven). Don’t overcook.
3. Once roasted, transfer vegetables into a large soup pot, cover with water, add bouillion cubes and rest of fresh sage leaves. Bring to a boil, simmer for a few minutes until all the flavours have come together. Add coconut milk and adjust seasonings.
4. Carefully transfer soup into blender in small batches, blend until silky smooth. Note: leave vent hole on blender lid ajar to let steam out and place kitchen towel on top to keep splatters in. Pour pureed soup into clean pot, adjust seasonings again (usually I adjust salt last).
5. Serve with crispy sage leaves (heat up a couple of tablespoons of coconut oil in frying pan, toss in fresh sage leaves for a few seconds until they get crispy, remove with slotted spoon and place on paper towel to drain excess oil), a drizzle of coconut milk or pepitas Or all three.

Veggies about to go in the oven…

Silky smooth, courtesy of the Vitamix!

Pan Fried Herbed Tempeh
Our vegan Thanksgiving feast needed something hearty to match up with the zing and tartness of the Spiced Ginger Cranberry Chutney, and thus came this tempeh recipe. I borrowed a bit of inspiration from a panko-crusted tempeh I encountered at a local vegan restaurant. In this version, however, I chose to use hearty whole-grain homemade breadcrumbs with the savoury flavours of sage and oregano; I love sage at Thanksgiving and my mom has tons of it growing in her backyard. The coconut oil I used for frying did not impart too much of its coconutty flavor but certainly you can replace with a more neutral-tasting oil of your choice.

1. Place bread crumbs, fresh sage, oregano, salt and pepper in blender or food processor, pulse until everything is combined and sage leaves are finely chopped.
2. Cut block of tempeh in half so you have two rectangles, now cut each piece in half again but this time in such a manner that you still have the same sized rectangles but now half as thick. Clear as mud?
3. Set up two bowls, one with coconut milk the other with bread crumb mixture.
4. Dip each piece of tempeh first in coconut milk, then into breadcrumbs, pressing firmly so that breadcrumbs coat the tempeh evenly.
5. Heat coconut oil in non stick frying pan on medium/medium-high heat, you should have enough oil in the pan to come almost half way up the tempeh cutlets. Gently place tempeh in the pan, fry for about 3-4 minutes per side until golden brown, don’t burn it! Don’t stress if some of the breadcrumb coating falls off (I didn’t).
6. Carefully remove tempeh from pan onto paper towels to drain excess oil.

Only picture of the tempeh, clearly this photo was taken on the run 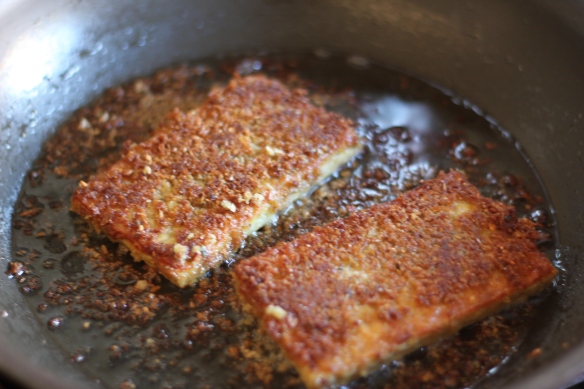 Spiced Ginger Cranberry Chutney
If you’re still using cranberry sauce from a can to compliment your holiday feast, this is the recipe that will hopefully get you to abandon that practice. It is tart, sweet, spicy and zingy. It is unapologetic in its bold and stand out flavours. It rocks my Thanksgiving plate and its absence from the table would be deeply mourned by all. Funny story, when I first started making this irresistible condiment, about a decade ago or so, I was not yet enlightened to the difference between star anise and anise seed, and so anise seed is what I picked up at the store. It has remained an ingredient in this recipe despite the fact that I now stock star anise in my spice cupboard,can’t imagine making it without it. On a side note, I usually make a double batch of it and preserve in small jars to enjoy as an accompaniment to many other meals and snacks.

1. Combine all ingredients in a saucepan. Bring to a boil, once cranberries start to pop, reduce heat and simmer uncovered for about 20-25 minutes. Chutney will thicken once cooled. 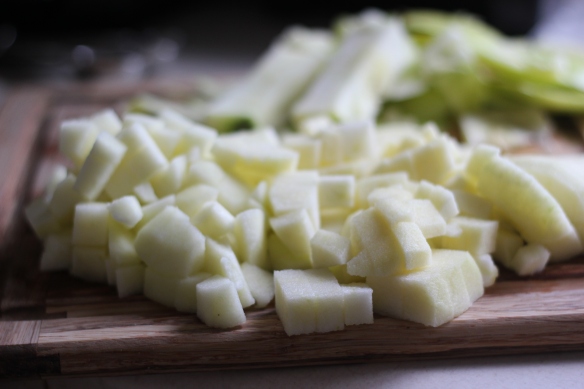 All in the pot it goes 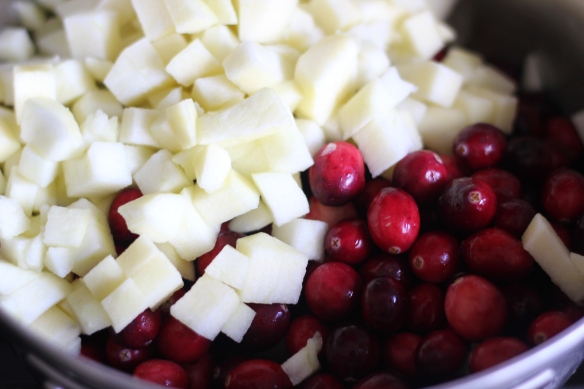 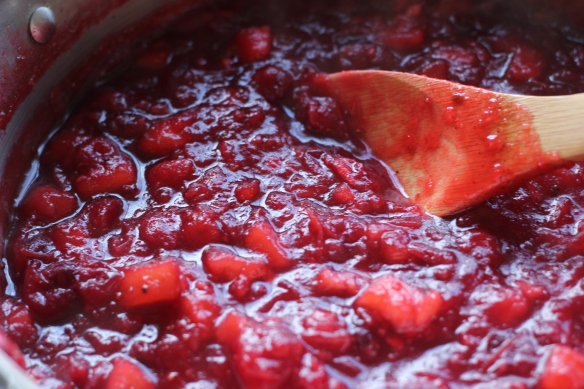 And there you have it. In case you’re wondering, the other side dishes were quite simple to prepare and don’t amount to much of a recipe. The squash and sweet potato got the same treatment – acorn squash was cut into slices while the sweet potato was cubed, both were drizzled with olive oil, maple syrup and sprinkled with cinnamon, salt and pepper, then baked in a 400⁰F oven. The Brussels sprouts were washed, trimmed and boiled until tender then combined with mushrooms sautéed in olive oil, all was seasoned simply with salt and pepper.

Coming all together for a party on my plate 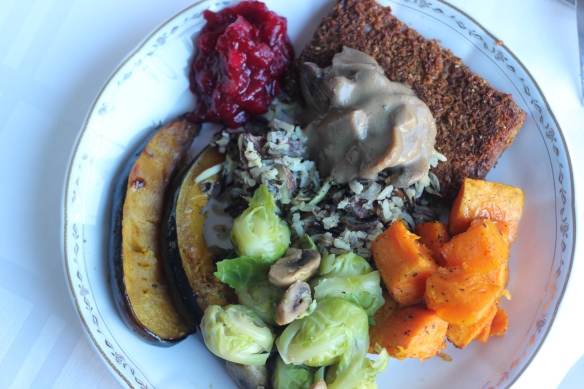 The pies did not make it to the picture stage as they were devoured in a flash. The pumpkin pie was ahhhhhmazing, the filling reminiscent of a rich butterscotch. The ginger snap crust worked out well but was a bit tough (no one cared). The apple pie was quite good, certainly no complaints from anyone but I could work on my vegan crust making skills. And the leftover caramel from the apple pie recipe was divine when heated up and served with a scoop of Coconut Bliss ice cream and chopped walnuts. It may be true that I polished off the rest of the caramel in this manner. But no witnesses have been found to confirm.